In a city full of temples, this smaller atmospheric temple in the heart of Chiang Mai’s old city area still manages to stand out. This temple is often overlooked but worth a visit!

Wat Phan Tao is an ancient Temple that sits right next to the sacred Wat Chedi Luang. This teak marvel is known for its exquisite Lanna-style ordination hall (called a Wihan in Thai) where the sacred Phan Tao Buddha image is enshrined. 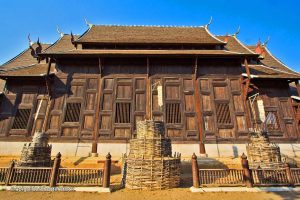 Interesting fact- before the building was constructed as a monastery, it served as a royal palace building for the ruler of Chiang Mai, Chao Mahawong. It originally stood on stilts, but these were removed when the building was refurbished as a monastery in 1876. Some traces of Chao Mahawong’s habitation can still be seen, for example, the front gable end is decorated with the image of a peacock standing over a sleeping dog surrounded by Naga. The dog is the zodiac symbol of Chao Mahawong’s birth year. The dog image is also present in the pediment of the left window on the front facade. The peacock symbolizes wisdom in Lanna culture. 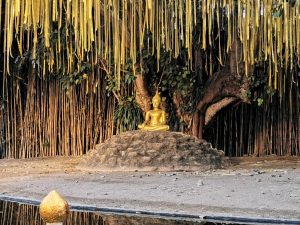 The name Wat Phan Tao, means “temple of a thousand kilns”. In the garden of Wat Phan Tao is a white chedi, a small bell tower and monks’ private living quarters, which are known as Kuti. Singh, mythical lions guard the temple. The viharn is constructed from ancient teak panels set on a stone base. It is one of the few remaining teak wooden structures of its sort in Chiang Mai. The Wat Phan Tao is one of the oldest temples of Chiang Mai found in the walled centre of the city. The first structures were likely built towards the end of the 14th century.

If you’re lucky enough to be in Chiang Mai for Loy Krathong and the Yi Peng Festival, hundreds of lanterns are displayed all around Wat Phan Tao. At night, the gardens are illuminated by a myriad of candles for a religious ceremony where novice monks meditate in front of the Buddha statue. A small moat filled with floating candles separates the garden from onlookers. This ceremony is unique and can only be seen in this temple. The monastery is one of the focal points for celebrations during the Visakha Bucha when monks light hundreds of oil lamps around the pond on the grounds.

Entrance to Wat Phan Tao is free, but if you’ve enjoyed the temple or taken photographs please leave a small token of your appreciation (20 Baht or more) in one of the donation boxes. Wat Phan Tao opens in the morning at 6am. The closing time is approximately 6pm, but will be later if there are any events taking place at the temple. Wat Phan Tao is located adjacent to the famous Wat Chedi Luang on Phrapoklao Road.

Thank you to our amazing community. Your support m

Congratulations! We wish you many lives of happine